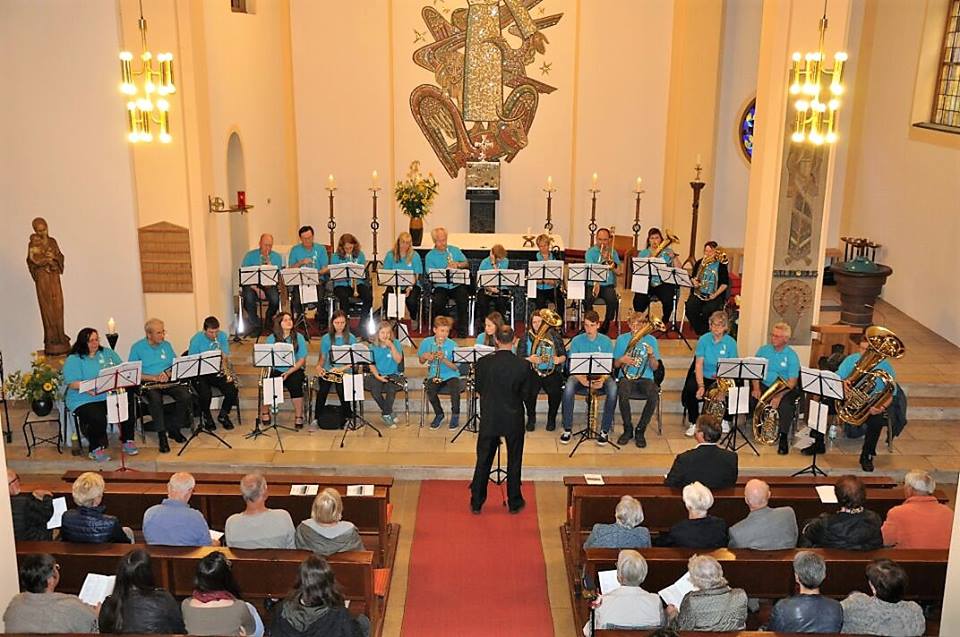 Brass choir Nordgermersleben on concert tour 2017 in the United States

The Posaunenchor Nordgermersleben, reinforced by musicians from trombone-bands in the near, take part in the Fine Arts Camp INTERNATIONAL EXCHANGE PROGRAM with a concert tour to Michigan/USA.

In the time  from October the 1th   to October the 14th 2017 30 musicians with trumpets, flugelhorns, clarinets, baritone horns, trombones and  tubas will make a tour through Michigan on the occasion of the 500th anniversary of Martin Luther`s reformation in the year of 1517.

About the Brass Choir Nordgermersleben

Brass choirs are a tradition in German churches, having been widely spread since the 19th century as amateur choirs. Today 120,000 brass players of all ages and professions are playing in 7,000 trombone choirs. Therefore trombone choirs were  listed as an „intangible cultural heritage“ in the list of the German UNESCO Commission. Mutual appreciation and Christian values ​​characterize the work in brass choirs.

The main task is to accompany the church services, but the choirs also perform on other occasions.

The Protestant brass choir Nordgermersleben has existed since 1968 and is in the sponsorship of the Protestant church community Nordgermersleben, a village of about 800 inhabitants. Currently it has 16 members between 10 and 78 years. The chorus will be joined by musicians from other brass choirs of our region, so 31 people are going to perform in those concerts in Michigan.

The brass choir was founded in 1968 by Klaus Ehlers, who had lead it for 48 years, before his successor Stefan Heinzel took over his job in 2015. But Klaus Ehlers, being the eldest  of the whole choir now, still plays the trumpet and is going to take part in the concert tour.

The new leader Stefan Heinzel, is directly involved with Blue Lake in Hundisburg. As the leader of „Haus des Waldes“ in Hundisburg he organized a part of the blue-lake-visit program in Hundisburg.  Some members of the Trombone Choir hosted students in their families.

The Brass Choir works voluntarily, spanning the generations. There is even one family who will send three generations on that concert tour.

Youth work is an important mission for the brass choir. Ten children and youngsters will work out their own repertoire for the concert tour in the youth brass choir. The trombone choir wants to contribute to the cultural exchange and understanding of the world through the music. The brass choir is looking forward to perform the concerts and to meet the host families.

The trombone band wants to make its contributions to  traditions and understanding between peoples by music. The tradition of non professional trombone bands is a cultural speciality of Germany. Musicians of all generations are working together in these bands. Mutual appreciations and Christian attitude are characteristic features for the relations in the trombone band.

About our concert program

The brass choir Nordgermersleben is from Saxony-Anhalt, a rather sparsely populated region in eastern Germany, founded after the reunification of the two German states in 1990.
Saxony-Anhalt can look back on a very rich cultural history: here the German princes chose their first king in the Middle Ages, here the first German Emperor Otto I was at home. With the famous notice of the 95 theses against grievances in the Catholic Church on October 31, 500 years ago, at the church Schlosskirche in Wittenberg, Martin Luther finally ended the Middle Ages in Europe and initiated the Reformation.
Martin Luther, the founder of the Evangelical Lutheran Church, was born in 1483 in the area of ​​today’s Saxony-Anhalt, lived  and died here in 1546. What the reformer wanted to have understood as the spiritual renewal of the church later led to the division of the church into the Roman Catholic and the Protestant Churches.
Martin Luther was also a gifted musician and a precursor of the rich singing and orchestral culture in Germany. The reformer was not only the first to translate the Bible into German, he also introduced the German-speaking church singing into worship. Before that time, Latin songs were common. Luther himself wrote a number of church songs, including the famous „A firm fortress is our God“, which will be performed at the beginning of the concert. Since Luther’s times, the German church singing has been an integral part of worship in both the Protestant and the Catholic Churches.

At Luther’s time of there were neither music score like today nor German-speaking church chorals. An impression of the music of the Renaissance in Luther’s time will be given by the opening work from Italy. In the following centuries, many composers set up church songs in chorales and created great, famous spiritual works. A number of composers gained fame in Central Germany, in which Saxony-Anhalt forms a core region: Georg Friedrich Händel, Philipp Telemann, Johann Sebastian Bach, Felix Mendelssohn Bartholdy and Richard Wagner. Particularly in the 17th and 18th centuries, many important composers were living in what is now Saxony-Anhalt. In the concert the following composers will be presented chronologically by chorales or short concertos: from the early baroque Heinrich Schütz and Johann Herrmann Schein, from the baroque Georg Friedrich Händel, Johann Sebastian Bach and Gottfried Reiche, from classical and romantic Christian Heinrich Rinck, Felix Mendelssohn Bartholdy and Max Reger. Everyone listening will hear the difference between the almost dance-like baroque music of Telemann or Haendel, the harmoniously more complex baroque music of Bach, the emotional and almost dramatic romantic works of Felix Mendelssohn Bartholdy and Max Reger. With Charpentier’s Eurovision music, a Frenchman will also be part of the program.

As contemporary composers and arrangers Traugott Fünfgeld, Tilman Peter, Michael Junker and Ewald Weiss will be included into the program.

Another part of the program includes german folk music like „Ännchen von Tharau“ and „freedom that I mean“ and also hits that have spread on both sides of the Atlantic such as „Mack the Knife“ from the Three Penny Opera by Bertold Brecht and Kurt Weill, who also comes from Dessau-Saxony-Anhalt.